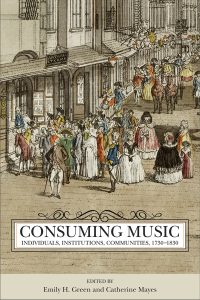 The successful sale and distribution of music has always depended on a physical and social infrastructure. Though the existence of that infrastructure may be clear, its organization and participants are among the least preserved and thus least understood elements of historical musical culture. Who bought music and how did those consumers know what music was available? Where was it sold and by whom? How did the consumption of music affect its composition? How was consumers’ musical taste shaped and by whom?

Focusing on the long eighteenth century, this collection of nine essays investigates such questions from a variety of perspectives, each informed by parallels between the consumption of music and that of dance, visual art, literature, and philosophy in France, the Austro-German lands, and the United States. Chapters relate the activities of composers, performers, patrons, publishers, theorists, impresarios, and critics, exploring consumers’ tastes, publishers’ promotional strategies, celebrity culture, and the wider communities that were fundamental to these and many more aspects of musical culture.